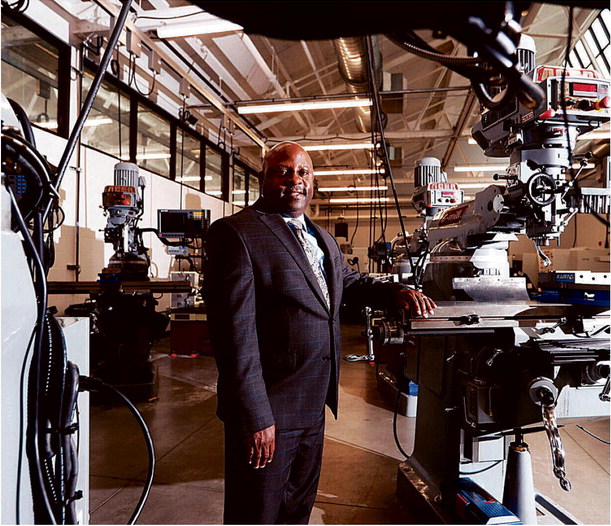 Story originally ran on Sunday, September 26, 2021 in The Buffalo News

The center aims to bridge the skills gap that makes it difficult for companies to hire the type of workers it needs.

That has become even more important since the Covid pandemic, when a widespread worker shortage exacerbated local manufacturers’ hiring difficulties, shrinking Western New York’s already small pool of willing, qualified workers who have been lured away by higher paying or less demanding jobs in other industries.

Classes are currently underway, comprising 300 students, and there is a waiting list of applicants still hoping to get in.

Tucker recently talked about the challenges and opportunities facing manufacturing workers and employers today, and how both have been affected by recent issues, such as Covid and the country’s Black Lives Matter racial reckoning.

Q: You’re part of the SUNY system, which requires students to be vaccinated by Sept. 27 or apply for a waiver. Has that caused problems?

A: We’ve already had some students withdraw. If I round it up probably between 7% to 10% are going to probably drop. They have strong feelings about the vaccine and they don’t want to get it.

I was talking to some students recently and they were trying to get me to advocate on their behalf but, you know, I told them that this is a SUNY requirement, not a Northland requirement.

Q: The shortage in trade workers has been an issue for years. How is it affected by the broader worker shortage happening now?

A: Right now, it’s a job seekers’ market. Businesses are paying bonuses. They’re pretty much not requiring a drug test for marijuana for the most part.

The job seekers can be very selective of where they go to work. If they don’t like the salary or the shift, or if it’s not convenient in terms of the location, they have options.

It’s a challenge, especially for those employers that don’t pay as much. So they’re trying different options to attract and retain a qualified workforce.

Q: The shortage of restaurant workers has put upward pressure on service wages. Has the same happened in the manufacturing industry? If so, will it last?

A: I think it’s gonna be the new normal, which is not a bad thing. The state minimum wage will eventually be $15 an hour. Companies like Wendy’s, Arby’s, Panera Bread, they’re paying $15, $16, $17 an hour. So the manufacturers have to pay more. They’ve started to look at their wages and increase their wages because they can’t find talent.

Q: Have you had any trouble recruiting students?

A: No. When most community college enrollment is going down across the country and even locally, our classes are full. We actually have a waiting list.

It looks like we have our largest student body, as well as our most diverse student body.

Q: What are the companies doing to try to overcome that?

A: We are starting to ramp up and launch apprenticeships. That allows students to earn a wage while they are simultaneously learning a trade and working. The partner companies sponsor. The students go to school and to work, but they have a user-friendly work schedule that supports their school schedule.

This gives companies a way to have access to talent that is trained to their specifications. It allows those students to be able to go to school, to acquire the advanced knowledge that’s necessary at these companies.

But even then, we have seven or eight companies involved, and we still have one or two companies that we still are trying to place people at those companies. But it has to be a good fit, not only for the company but for the students as well.

So those are some of the strategies we’re trying to roll out to support businesses with attracting qualified workforce. And the companies are open to it. Before they weren’t, now they are.

Q: What are the most profitable jobs to go after?

So it really just depends on the company as well as the participant. We have some very, very, very strong candidates making those higher wages; $60,000 to $70,000. And we have some right out of college with no professional or technical experience, so they’re coming in a little lower.

Q: Last year, in response to the Black Lives Matter movement, companies started vowing publicly to create a more equitable workforce . Has that happened in any meaningful way?

Q: What are some of those strategies?

A: It’s more than just diversity in terms of race and gender, it’s also generational. The younger generation, they want to understand how their life’s work is impacting society.

In the manufacturing sector they don’t talk about mission or vision or the product and how the product is saving a life or making the world better. They just put you in there and you go to work.

Now we’re seeing more progressive onboarding strategies; having team building sessions with everybody in the organization and not just the managers.

It’s things like providing more front-line supervisor training so that they can have the cultural competency to be able to manage and lead diverse populations.

Most managers are promoted because of their technical skills, but they’re not necessarily the best in human resources or leading human capital.